Since early childhood Satyaa expressed an intense love for music, art and dance. As a child she was spending hours and hours with singing and listening to music learning lyrics of songs she liked. This led her to the study of piano, classical and modern dance. After finishing a musical high school she studied visual arts (cinema, photography and painting) at the University of Beaux Arts of Geneva.

This love for art, dance and music expanded into a longing to find out more about herself and true Art which has led her into the ashram of Osho in Poona in the year 1989.  Following the call of her heart for freedom. Satyaa settled into a completely new life in India, feeling that this was the place she would stay forever. The encounter with Osho opened up another level of depth in all areas: she experienced the Dance without any dancer, Song without any singer. Osho was encouraging to explore the ultimate presence that we are, using all kind of methods and technics; one day while she was dancing doing the Latihan meditation (a meditation where you connect the Divine through dance), she completely dropped into this vast space of emptiness and absolute presence where all activities happen by themselves, all dance happens without any performer.

After Osho had left his body in 1990 she was led "by grace", as Papaji from Lucknow used to call it, to him. He told her - and that´s exactly what she felt in her heart - that her "previous master has sent you here".  Soon it was clear that this wasn´t just a short visit and she became a long time resident there. Satyaa´s  love for music, dance and singing started to burn intensely also in Lucknow, since Papaji started to encourage people to sing and dance in his Satsang. She was often singing for him and the direct contact with this man looking into her eyes while dancing or singing, made it clear that there was only the one song, the one dance, that we all share in the Heart. By Papaji´s grace all art pointed to That, as an expression of Truth and Love.

In Lucknow she met Pari, to whom she soon was to get married by Papaji. They discovered that they also shared a deep love for music and singing - that´s what they have been doing ever since. Soon after this she moved to Corfu, Greece, in 1995, where she has been living with Pari and their daughter Mira, who was born in 2000. Satyaa has been sharing her love for God and Truth in weekly gatherings at the Alexis Zorbas Center which Pari had co-founded in 1991... She started to travel with Pari all over the world leading retreats, chanting seminars and concerts touching many people´s hearts with her Love and Fire for Truth. Currently she is living in Munich, Germany with Pari and Mira. In the summer months she is spending much time in Corfu, Greece.

"Following a call from within Pari went in his early twenties to India, in search of a living spiritual Master. He visited many ashrams and met remarkable saints. After spending several months in the mountains in South India, he went to see Bhagwan Shree Rajneesh in Puna, now known as Osho. He stayed with him many years and also lived for some time in his commune in Oregon, America. The experiences and the openings experienced near him, are beyond words and there is no way to possibly thank him for this - immeasurable thankfulness.

After Osho left his body in 1990 there was this feeling deep inside arising that there was yet another Master calling...

This call was answered, when he met HWL.Poonja in Lucknow, a city in north India, in the winter of 1991.  Meeting Poonjaji, by his devotees lovingly addressed to as "Papaji", had such a strong impact on Pari, that he couldn´t run away or go on looking around any more. This meeting was a crucial and profound one - that eternal search and missing the obvious came to an end. No words can ever exist for that - too quiet, too silent, too peaceful, too obvious.

Struck by grace he spent there the following years close to Papaji, interrupting his annual stay in Lucknow for the summer months, when he went to Corfu, to work in the Alexis Zorbas center. While living in Lucknow he got married to Satyaa by Papaji. There they often sang bhajans for Papaji in various occasions, in his satsangs, in his house and elsewhere.

Pari lives a life of a householder with Satyaa and his daughter Mira, attending to all the needs that such a life brings forth, while also leading retreats, satsang and concerts  in various places.

The everyday life is the only sacred life there is. The beauty of our own inner nature is always present and quiet." 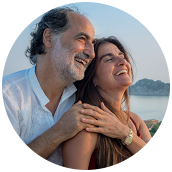