Lance Johnson (Pema Wangchen) has been a practitioner of meditation and the Buddha Dharma for twelve years. With a focus on healing trauma and developing a compassionate wise heart.

As a "Companion Of The Way" He lived with the Zen master Shinko Rick Slone for two years where they practiced Shikantaza while serving the homeless population of Salinas California.

And then lived, served, studied and practiced at Lama Zopa Rinpoche's Tibetan Buddhist retreat center Land Of Medicine Buddha near Santa Cruz California, for four years. He was blessed to receive teachings from many great masters.

He took Refuge Vows from the Dzogchen Master Lama Sonam Rinpoche in 2015 at Pema Osel Ling.

His primary guru is Lama Tharchin Rinpoche and his other teachers include Lama Thupten Rinpoche, Master Thiac Giac Nguyen and Khenpo Karten Rinpoche.

Lance is offering Mindfulness Meditation in retreats, workshops and in individual groups. He also offers personal coaching and guidance in Meditation. 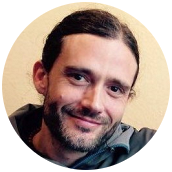